Regardless of how a player decides to run their nation, they will eventually find themselves locked in combat at one point or another. When they do there are two different choices they can take for how their battles play out: auto-resolve or tactical battle.

Auto-resolving a battle will cause the AI to simulate the battle without any further input from the player. While it is extremely quick, the AI is not as knowledgeable about the general game situation and will generally not be able to apply as solid strategies as a human being. Because of this, in battles where the outcome is in doubt it is recommended that the player choses to take control of the fight themselves with a tactical battle.

Tactical battles provide players with the opportunity to micro-manage engagements themselves to get the most from their units. There are many skills and abilities only available for use in tactical battle, in addition to special rules for movement and actions that vary from in the strategic mode. In order to experience all there is to Fallen Enchantress players should consider engaging in tactical battles for their more interesting enemy encounters. 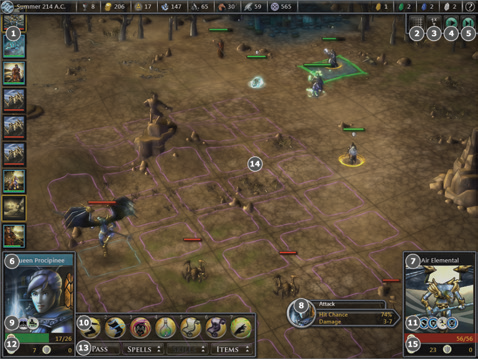 The initiative list in tactical combat shows the exact order every unit is going to take its turn, along with when spells with a casting time are set to go off. The higher a unit’s initiative the faster and more frequently it will show up in the queue.

When it is a unit’s turn they can move and then take an action. Once a unit has taken an action its turn it over, regardless of if it has moved or not. Because of this, be sure to move before you use your actions when you want to move.

Movement
While a unit can move up to its maximum moves, in tactical combat there are special rules for movement that can limit them. Units cannot move through other units in tactical combat making how a player moves their units extremely important. Beyond that, every unit in tactical ends their move when passing through melee range of an enemy target. This limitation means a player one can set up formations of melee units to slow the passage of enemy units to their back lines. To illustrate these rules the tactical map will glow green in any tiles a unit can actually move to this turn. If one wishes to see the move potential for another unit they can hover over them and it will display tiles they could move into on their next turn with a pink indicator. Be aware that a unit can only move once a turn, even if they have not moved to the edge of their radius.

Actions
Once a unit has finished moving they can perform any one action. Actions can consist of attacking, casting a spell, using an item or special ability, and passing the turn. Units can cast any tactical spell they have access to during combat, even if they do not appear on their hot bar. The same goes for skills and consumable items, any not seen can be selected via the ‘spells’, ‘skills’ and ‘items’ menus respectively. If a units chooses to pass their turn they will receive a defense bonus until they take their next action. Finally, it is important to know that a unit cannot use an action and then move.