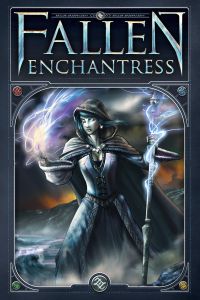 In it, the player is one of the few beings capable of channeling magic from the various shards of power that are scattered across the world. As such, the people look to them for leadership to spread their civilization across the land.

Through the course of the game, the player will research new technologies, learn new magical spells, raise armies, negotiate treaties, fight wars and go on quests as their people struggle for domination of the world.

The Legend of the Fallen Enchantress

To set the stage for the main game, Fallen Enchantress includes a scenario that explains how the world got into such dire straights. Without getting too specific, the world was broken approximately a century ago when the men of the west combined forces under a single sovereign named Amarian. They marched west to confront the Titan Emperor, Curgen.

Over the previous centuries, the immortal Titans had twisted the inhabitants of the world into various new species, collectively called “The Fallen”. These included the Quendar, who were the scholars and elite warriors of the Titans, the Trogs, who were bred purely for war and the Urxen, who served as workers for the Empire.

Curgen, in an attempt to crush his enemies, attempted to open a rift that would bring in reinforcements from the world in which the Titans hailed from. When his plan failed, a massive cataclysm occurred that laid waste to the world. Nearly everyone died.

For approximately a century, the various mortal races struggled to survive. During this time, far older beings began to lay claim to the world. These Elemental Lords and their allies began to dominate the land.

Eventually, the player character was born with the gift to channel magic from the scattered elemental shards that remained after the destruction of the Titans. The player's objective is to bring order back to the world.

The scenario, tells the story of one of these “channelers”. Relias, who, at the time, was an agent of Queen Procipinee, the most gifted Channeler of the new age. He has been sent to the East to seek out the Oracle who will tell Procipinee how to prevent the rise of the Empire of Sorcery, a great evil that has been prophesized since before the cataclysm.

There are several choices to make before starting a game in Fallen Enchantress.

Lists the hotkeys for Fallen Enchantress.

Fallen Enchantress requires at minimum a PC running Windows XP, Windows Vista, Windows 7, Windows 8 or later. The video card must have at least 512MB of memory with total system memory of at least 2GB in order to play.