Difference between revisions of "Sorcerer King" 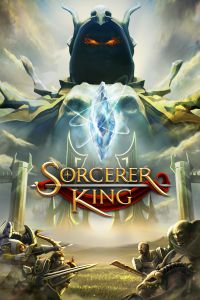 Sorcerer King is a new direction for strategy game design, pitting the player against a single overwhelmingly powerful enemy instead of a set of evenly matched factions racing for abstract victory conditions.

There are six sovereigns the player can select to play as when starting a new game. Each different abilities, spellbook allocation, and starting units.

Expanding the kingdom via pioneers is vital, and should be one of the player's highest priorities.

The landscape is dotted with a random selection of the hundreds of quests in Sorcerer King. Completing them grants crafting components, lore for researching new spells, new units, magical artifacts, and can even increase or decrease the Doomsday Counter.

Battles in Sorcerer King are quick and to the point. Nearly every unit in the game has a special ability, from Tandis' sweep attack that hits all adjacent enemies to the Stalker's deadly maul, which hits over and over again until dodged.

The sovereign can cast spells to help the player's forces out. A quick heal or weak summoned skeleton might give their armies the edge in the early game, but later on calling down devastating blizzards or walls of living flame can practically win battles by themselves.

The Sorcerer King is trying to destroy the shards. If not stopped it will be the literal end of the world.

Each shard destroyed by the Sorcerer King's forces pushes the Doomsday Counter forward. If it fills up, it's game over.

Completing quests in benevolent ways will lower the Doomsday Counter and delay the Sorcerer King's victory, and the shards must be defended to keep the assault at bay.

There is only one way to win in Sorcerer King: he must be defeated in battle. Naturally, it's easier said than done.

First, one must find his two lieutenants. Don't worry, one can't miss the enormous fire and ice demons roaming the landscape. Bringing lots of friends and a full mana bank to any confrontation with the lieutenants is highly recommended.

Crafting is critical in Sorcerer King. Killing monsters and completing quests gives crafting materials, which can be turned into everything from basic chainmail to epic flaming swords.