Difference between revisions of "The Adventure Begins"

Selecting to begin a new game will launch the ‘sandbox’ mode of Fallen Enchantress.

This is the standard way of playing, however, before that it is advised to first play the Tutorial.

When beginning to start a sandbox game there are a few steps needed to be take in order to set up the world.

The first step is to choose a Sovereign. The Sovereign is the hero that will lead the people to victory. They are very powerful units in their own right, with abilities that will affect the entire faction.

Each Sovereign is also tied to a specific faction, making the decision even more important.

Sovereigns may also be created. 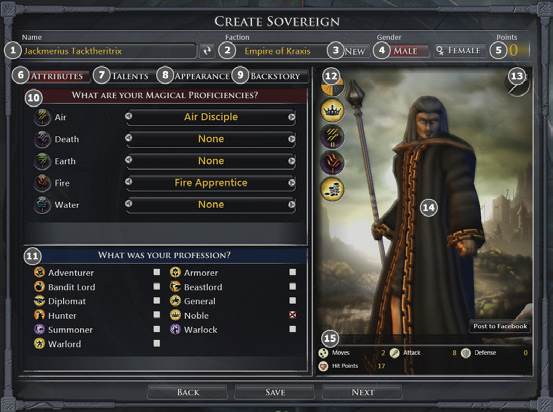 There are many options that can be chosen when creating your a Sovereign. While some are purely cosmetic, others can completely alter the way the game is played. Choices that affect gameplay each have a point cost associated with them, the number of available points determines how many can be chosen. 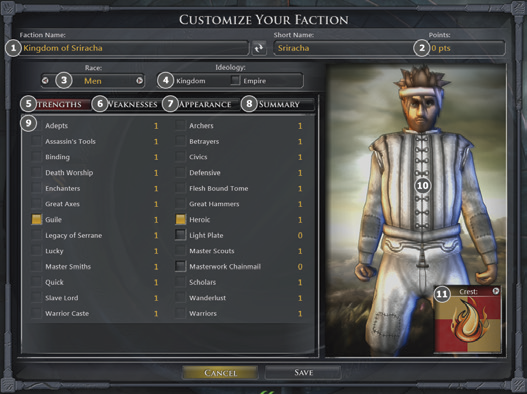 In order to create a custom faction there are a multitude of options to consider to get them just as desired. Much like Sovereign creation, every custom faction can have a number of unique traits, each with their own point value. The number of available points determines how many can be chosen.

Once a Sovereign has been selected, it is time to choose the parameters of the world to play in. For the default game experience leave everything on this screen as-is. If you do choose to adjust your settings, you can match your world to your desired play style on this screen.

On the final screen of the world setup the game’s victory conditions and opponents can be adjusted. This screen allows to quickly and easily change the AI factions with broad strokes. In order to manually pick each faction that is in the game, the “Customize Opponents” button can be clicked for additional options.