Difference between revisions of "Units"

There are many different classifications and styles of units, all of which are of crucial importance to a nation. In spite of their differences, there are a number of attributes and statistics all units share. 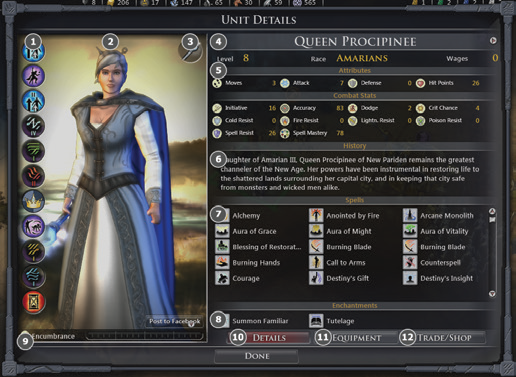 Traits
The most defining characteristics of any unit are usually their Traits. Traits are special bonuses, stats and abilities that any unit can possess. They are visible both on the unit info pane and the unit details screen and are easily recognized by their unique icons. While any unit can have Traits, different traits are restricted to certain types of units and they can be gained in a variety of ways.

Unit Attributes
Beyond Traits, there are core attributes that every unit shares.

Champions are the heroes of Elemental. They are each unique, with their own history, traits and appearance. They can be customized with different equipment and Traits as the game is played and they grow much more powerful as they level up. In order to recruit Champions, the player will have to find them in the world, move a unit next to them and agree to pay their requested recruitment fee.

Death
As long as one city is under the faction's control, Champions will not die when they fall in battle. Whereas a normal unit would die, they instead will suffer an injury in the form of a permanent negative trait. If the battle they fall in is lost, they will retreat to the nearest city and require multiple turns in order to recover and leave the city.

Equipment
Champions are unique from other units in that they can change their equipment at any time. They can acquire new equipment in a variety of ways including notable locations, shops, quests, and combat. These can be equipped via the Equip menu on the unit details screen in order to take advantage of their bonuses.

Level up traits
One of the most important distinctions between Champions and other units is the way in which they level. While most units simply gain statistical bonuses at each new level, Champions also get to select a new unique Trait every level. These traits will further specialize a Champion, providing them with special bonuses, spells, and abilities not available to other units.

Spells
Another huge feature that is unique to Champions is their ability to cast spells. Champions gain access to spells via unique traits when they level up. For every rank in a spell trait a Champion will unlock new spells for use in battle or the strategic game. Champions will never be able to pick entirely new spell traits, instead they can only advance those they start with. This is important to consider when deciding which of the Champions to specialize down a spell casting path.

Quests
Champions are special because they are required in order to undertake quests and claim notable locations. While a Champion is needed for these actions, they can still bring other units with them to help out in their adventure. As a result of this requirement, many quests and notable locations feature rewards specifically for Champions.

The Sovereign is the leader of the nation. They are a special Champion that represents the faction's people in the world. Unlike Champions, Sovereigns do not suffer injuries when falling in battle, but they will still have to spend time recovering following lost battles. Should a Sovereign fall in battle while its faction has not city, it will be game over for that faction.