If units are the lifeblood of a nation, cities are its backbone. Cities are the foundation of almost every aspect of a faction's economy, from Gildar to Mana, and all resources in between. Understanding how cities work will ensure one can keep their coffers strong and production facilities running smoothly.

As cities will be of vital importance to a nation, understanding how and where they should be settled is the first step on the path to greatness. A faction's first city in the world is settled by their Sovereign. In order to place it, the Sovereign must be moved to a valid location on the map and Settle button clicked. Pioneer units are required to settle additional cities.

Pioneers are a basic trained unit that every faction has access to from the start of the game. They are crucial for expanding a nation by settling cities and constructing outposts. They have no defenses of their own, so they should be protected when exploring.

Settle City
In order to settle a city with a Pioneer one will need to find a suitable location, move the Pioneer there, and click the “Settle” button. Any location with visible tile yields can support a city. Land near resources, fertile looking land and rivers are often places to look for to find tiles with yields.

Build Outpost
Building an Outpost is even easier than settling a city. Outposts can be built on any vacant tile that isn’t in claimed territory by moving a Pioneer there and clicking the “Outpost” button. Outposts are extremely useful for claiming resources in areas that could not support a city, or even just extending borders. Keep in mind that unlike cities, Outposts will not generate tax revenue or have a build queue. Any resources claimed near the Outpost will be counted as attached to the closest city and any upgrades wished to build on the Outpost will be added to that city’s build queue.

Cities can be settled on any location with visible tile yields. Tile yields are the green, orange and blue icons found in tiles, along with their corresponding numbers. The yields displayed in any one tile are calculated based on the fertility of the land in that tile and all the tiles immediately surrounding it. An area will not display yields if it is too close to another city for a new city to be placed there.

The yields of the tile a city is founded on are of vital importance to its future potential. A city’s yields dictate a number of its statistics and will modify the output of many city improvements and enchantments. While one can increase a city’s yields after it is founded with improvements and spells, the initial amount will shape the long term potential of the city in addition to its early game values. There are three different types of yields: Grain, Materials and Essence.

Grain
Grain yields can be identified by their green color and grain icon. They are the tile yield denoting a city’s Food production and potential maximum Population. For every grain in a city, it will provide an additional 20 Food, which in turn can support 20 citizens. As the game goes on, the player will find numerous ways to increase the food supply beyond this total, often by increasing how much Food a single Grain yield provides or actually increasing a city’s Grain. It is recommended to settle on tiles with high Grain yields to one day have a high level city with a large Population and high tax income.

Materials
Material yields can be identified by their orange color and hammer icon. They are the tile yield representing a city’s Production potential. Production is the measure of how quickly a city can build improvements and train units and is essential for any type of city. While there are many ways to increase your Production, the starting yields of a city will be a huge factor in its progression and final values. Settle on tiles with high Material yields when to make a city focused on unit training or filled with improvements.

Essence
Essence yields can be identified by their blue color and swirl icon. They dictate how many enchantments can be cast on a city and measure that city’s general ‘magic power’. While Essence will not directly change any of the resources of a city beyond its number of enchantments, there are numerous magical improvements that can provide bonuses that scale with a city’s Essence. A city with high Essence can be filled with the numerous powerful enchantments.

The city details screen is the best resource for a complete breakdown of a given city. Any information one could hope to know about the city itself is shown here, complete with tool-tips, to help understand its inner workings. 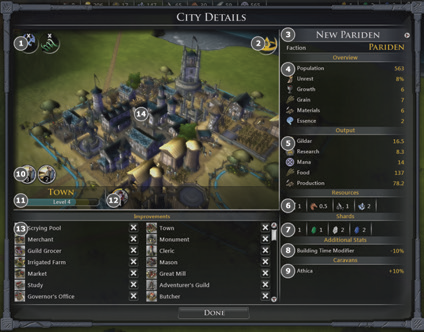 For more information on city resources and how they tie into a nation as a whole please consult City Resources.

Cities can either be building an improvement or training a unit at any one time. The improvement being worked on, or unit being trained, at any given time is indicated by the first item in that city’s build queue. Every season, all of the Production of that city will be applied toward that item in an effort to finish its construction. Improvements or units can be queued up to be worked on upon the first item’s completion. The order of items in the queue can be adjusted by dragging and moving them on the city info panel of the main UI, though they cannot be re-arranged in the city details screen. Because only a single unit or improvement can be under development in a city at a time, deciding when to improve the economy versus strengthening military is of the utmost importance.

Conclave
Conclaves are cities specialized in research, magic, and other scholarly pursuits. The Conclave improvement itself increases the city’s research while it isn’t building anything. In addition, there are a number of improvements that can be built or gained when leveling up in Conclave cities that increase Research, Influence, Mana, and more. Many improvements unlocked by Conclaves scale based on its Essence, making a city with high Essence yields a good choice for a Conclave.

Fortress
Fortresses are cities specialized in defense and military endeavors. Choosing the Fortress improvement at level two will allow all units trained in that city to start at a higher level. The improvements unlocked in Fortresses will greatly help trained units, both by increasing their power and reducing their cost. Fortresses are a great choice for cities when gearing up for war. While any city can be a useful Fortress, those with high Material yields will probably be the most effective.

Town
Towns are cities focused on economic gains and national infrastructure. While the initial Town improvement will just increase its borders, future unlocks can provide boosts to Food, Production, Gildar, and more. Many Town improvements can actually benefit all of a nation's cities, making Towns a crucial cog in the gears of any nation. Towns can flourish regardless of a city’s initial tile yields. They can be used to shore up cities that would otherwise underproduce, or when the economy needs a shot in the arm.