Relations with the other nations of the world are of vital importance in the quest for supremacy. Depending on what their ultimate plans for victory are the player will need to adjust their relations with others accordingly. If one is looking for a conquest victory, deciding when to declare war on their enemies and form alliances, however temporary they might be, is crucial to emerging the top dog in the fight. For those more inclined to peace, a diplomatic victory can be arranged by forming strong alliances; and potentially wiping out those who still oppose them. Even players looking to complete the Master Quest or cast the Spell of Making can use foreign relations to their advantage to keep the peace, secure safe travels through enemy lands and gain economic benefits for their nation. The best place to manage the relationships with other factions is on the foreign relations screen of the govern menu. 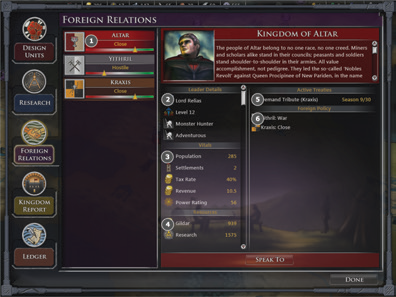 There are many different types of treaties available depending on what the player is looking to accomplish with their foreign relations. Knowing which treaty one wants to enter into at what time is key to maintaining their relationships and getting the most out of their dealings.

Non-Aggression Pact
A non-aggression pact is exactly like it sounds. When entering into it, both parties agree to avoid conflict with one another for a set amount of turns. Depending on the power levels of the nation one is trying to sign the pact with the perceived value of the treaty could vary wildly. Whichever side has the weaker military presence will be seen as the party with the most to gain, increasing what they will have to give up for the pact.

Alliance Treaty
Alliance treaties are the strongest treaties two factions can enter into with one another. Once joined in an alliance treaty, both factions are treated as one for the purposes of a diplomatic victory and will assist one another when attacked by other nations.

Trade Treaty
A trade treaty is a mutually beneficial agreement two factions can enter into that will allow both of them to increase their income through joint cooperation. While they help both factions involved, one must always take care when helping nations that could potentially become their enemy down the road.

Technology Treaty
Technology treaties benefit both parties involved, increasing both nations’ research income every turn. Increasing research can be extremely useful for to a faction, however, providing a potential competing faction with a technology boost can be dangerous as well. One must consider carefully which nations to enter into technology treaties with.

Tribute Treaty
Tribute treaties are the back alley shake down of the diplomatic world. If one feels like pushing around a faction that is weaker than them, they can demand a tribute treaty and force them to pay Gildar every season. Conversely, if one is looking to appease a stronger nation, and potentially avoid a disastrous war, paying tribute to a stronger nation may improve their relationship enough to sway the tide.

When a nation discovers a technology they get a portion of that tech’s research cost as ‘Knowledge’. Warfare techs provide Warfare Knowledge, Civilization techs provide Civilization Knowledge and Magic techs provide Magic Knowledge. This Knowledge can be traded to and from other players and provides free research in the category it came from to the player who receives it.